It's All About the Hat!

Sure, they call it, "the greatest two minutes in sports," featuring races 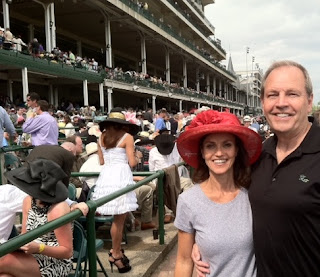 with some really fast horses, big-money wagering, and the traditional mint julep—which, incidentally, we found someone to make us a virgin with ginger ale instead of bourbon—but the Kentucky Derby really is a race for the best and prettiest hat; the largest brimmed, the floppiest, the most creative, or the best coordinated with sundress and sandals.

My husband, Wayne, and I were in Michigan in early May visiting family, when we realized we had a couple of extra days on our hands and that the 137th running of the Kentucky Derby was that coming Saturday, May 7th. We switched our flights, rented a car and drove the seven hours from Ypsilanti to Louisville, Kentucky. The "Run for the Roses," after all, was on our bucket list and we thought we may never pass this way again.

There was just one problem. I didn't have a hat! Never mind that we didn't have tickets to the derby or a place to stay. Where was I going to find a hat before the big race 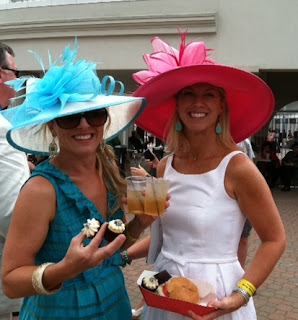 After asking around, a tony neighborhood was suggested. While driving along Frankfort Avenue, we spotted a consignment store with several stylish hats in the window, but it had closed for the day. There was a particularly fetching red one. We drove a block and found a boutique still open. But after checking the prices and very gracefully trying not to show shock, I left the boutique. The hats ranged from $800 - $1200. I wanted a hat, a pretty one, but not that desperately!

We returned the next day; the day of the race and found the red hat still in the consignment store window. It fit well enough. Sold! It cost me only twenty bucks!

I didn't have a pretty dress or strappy sandals, but I had a red hat! And I felt a part of the festivities. I think a horse by the name of Animal Kingdom won the Kentucky Derby. Mmmm...I'm not sure. Oh well, I was thoroughly entertained by the "scene" at Churchill Downs; the people and all those wonderful hats.

Here's the name and address of the consignment store if you find yourself in Louisville, derby weekend, sans hat.

The Kentucky Derby is always the first weekend in May. Let me know if you want information on how to buy tickets, experience Millionaire's Row, navigate the "Infield," concoct a virgin mint julep or you just want to know the best place to see celebrities.
Posted by Teresa at 10:57 AM